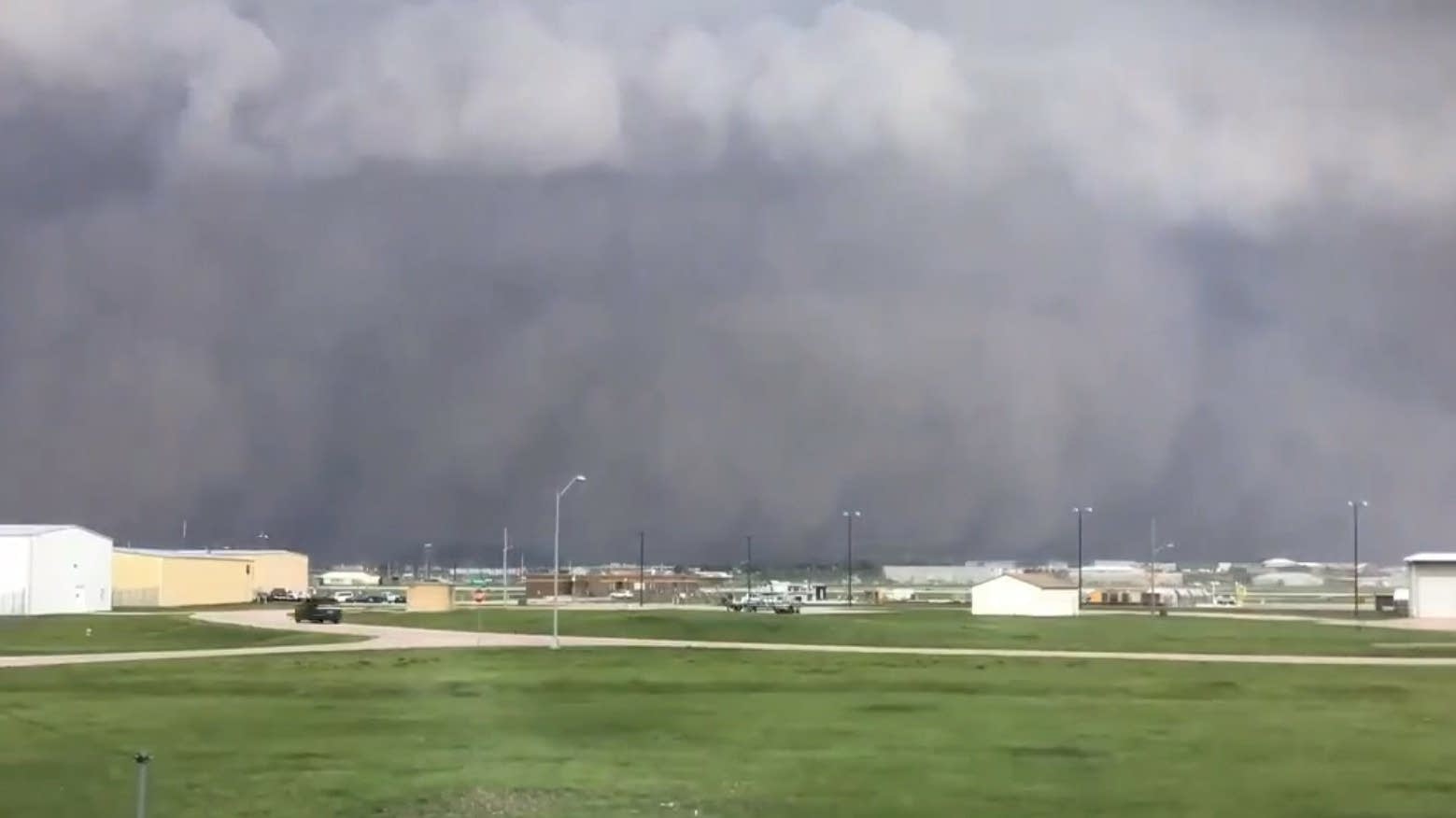 At least two people died as severe storms packing winds in excess of 100 miles per hour swept across eastern South Dakota and much of western and central Minnesota on Thursday.

Emergency management officials in Kandiyohi County, Minn., reported one person died near Blomkest, south of Willmar, when a grain bin fell onto an occupied vehicle at about 7 p.m.

More than 70,000 homes and businesses remained without power across the region early Friday as damage assessment and cleanup continued after the second straight night of widespread severe weather.

There were several reports of funnel clouds and tornadoes on Thursday — including one near Pillager in central Minnesota, and another at Castlewood in eastern South Dakota.

But widespread, hurricane-force straight-line winds appear to have caused most of the damage.

A weather station at Tripp, S.D. — southwest of Sioux Falls — reported a wind gust of 107 mph as storms moved through Thursday afternoon.

A 102 mph wind gust was reported near Gary, S.D. — near the Minnesota state line. Wind gusts of 94 mph were reported at the airport in Madison, Minn., as well as at Verndale, Minn., in Wadena County, on Thursday evening. A weather station at Alexandria, Minn., reported an 87 mph gust.

Those winds picked up dirt from farm fields, creating a dust cloud as the storm front swept across eastern South Dakota and into western Minnesota. Ominous, rolling shelf clouds rolled across much of the state.

The winds caused widespread damage to buildings, power lines and trees across the region.

A dispatch to the National Weather Service on Thursday night from near Long Prairie in Todd County, Minn., reported “house fine, shed and barn missing at the moment. Trees and power lines down all over the county.”

Airplane hangers were damaged at the airport in Morris, Minn.

A spotter report from Chokio, Minn., noted “power poles snapped at base, live wires, 3.5 feet in circumference trees snapped and on houses.”

Building damage also was reported in Osakis, Alexandria and Holloway, among other Minnesota communities.

The strong winds also overturned semis along Interstate 94 near Alexandria, forcing a closure of the eastbound lanes. The freeway has since reopened — though there are ongoing reports of flooding covering some roads in central and western Minnesota due to heavy rain.

Heavy rain also was reported in northeast Minnesota, where a flash flood warning was in effect until 9:15 a.m. Friday for the North Shore, amid concerns that rain-swollen rivers could wash out bridges and culverts.

The National Weather Service reported that 1 to 2 inches of rain fell overnight, adding to rivers that already were running high. Some river gauges along the North Shore showed a sharp uptick in water levels.

Flood warnings also continue in the Rainy River basin along the Canadian border, and in the Red River valley.

You make MPR News possible. Individual donations are behind the clarity in coverage from our reporters across the state, stories that connect us, and conversations that provide perspectives. Help ensure MPR remains a resource that brings Minnesotans together.

Donate today. A gift of $17 makes a difference.

April 23, 2022
The Rays tossed nine no-hit innings against the Red Sox today, but while the no-no was erased during a wild tenth inning, Kevin Kiermaier ’s walkoff homer gave Tampa a 3-2 victory.  Six different Rays pitchers combined to hold Red Sox batters without a hit or a run over the game’s first nine innings, yet the Tampa Bay lineup was also shut out (on two hits) against Boston pitching.  The Sox finally broke out for two hits and two runs in the top of the 10th, yet the Rays roared back in the bottom half of the inning for what might already be the most unusual win of their season. This is the 15th time in Major League history that a would-be no-hitter wasn’t broken up until extra innings, and only the second time that such a game was tossed by more than one pitcher.  Matt Garza ’s gem on July 26, 2010 remains the only no-hitter in Rays franchise history.  Tampa has been on the wrong end of no-hit games on five occasions, with three of those five being perfect games (from Mark Buehrle , D
Post a Comment
Read more

April 23, 2022
1:25 PM ET Marly Rivera ESPN Writer Close Marly Rivera is a writer for ESPNdeportes.com and ESPN.com. With a single against the Colorado Rockies on Saturday, Miguel Cabrera became the 33rd member of the 3,000-hit club and only the seventh player in major league history to achieve the milestone and hit 500 home runs. He got No. 3,000 in the first inning against pitcher Antonio Senzatela, a fellow Venezuelan, by grounding an opposite-field single to right field. Cabrera immediately raised his right arm as he headed toward first base. The crowd of 37,566 at Comerica Park gave him a rousing ovation and chanted “Miggy! Miggy!” while fireworks were shot out of the scoreboard. Rockies shortstop Jose Iglesias, who played with Cabrera on the Tigers, came over to give his former teammate a big hug. 2 Related By then, all the Tigers were streaming from the dugout to greet the newest member of baseball’s elite 3,000-hit club. Moments later, Cabrera went behind home plate to embr
Post a Comment
Read more

April 29, 2022
This is the end of the first week after Twitter accepted Elon Musk’s $44 billion buyout offer, and one of the strangest tech transactions ever just keeps adding new twists. A detailed report from The Wall Street Journal has peeled back a few layers on the process that began with Musk accumulating Twitter stock back in January and what that might mean when he eventually closes the deal and becomes its owner. Taken with additional information from The Verge contributing editor Casey Newton in Platformer and a new report from Reuters , the picture starts to become clearer. Reuters is adding more details to earlier reports from Bloomberg and The Washington Post about the ideas Musk pitched to bankers who will loan him some of the money he needs to buy Twitter. According to Reuters’ sources, he told bankers that he plans to develop revenue-growing features, and one of his examples is “charging a fee when a third-party website wants to quote or embed a tweet from verified individual
Post a Comment
Read more