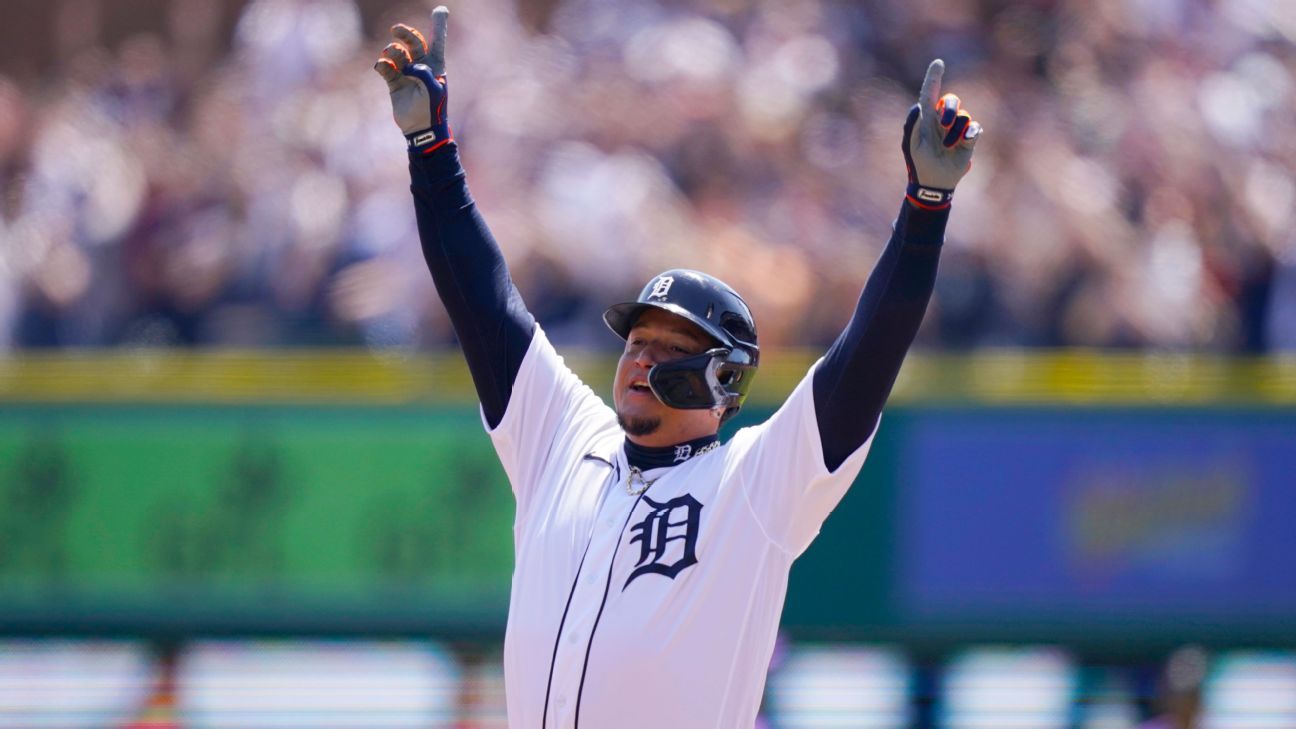 With a single against the Colorado Rockies on Saturday, Miguel Cabrera became the 33rd member of the 3,000-hit club and only the seventh player in major league history to achieve the milestone and hit 500 home runs.

He got No. 3,000 in the first inning against pitcher Antonio Senzatela, a fellow Venezuelan, by grounding an opposite-field single to right field.

Cabrera immediately raised his right arm as he headed toward first base. The crowd of 37,566 at Comerica Park gave him a rousing ovation and chanted “Miggy! Miggy!” while fireworks were shot out of the scoreboard. Rockies shortstop Jose Iglesias, who played with Cabrera on the Tigers, came over to give his former teammate a big hug.

By then, all the Tigers were streaming from the dugout to greet the newest member of baseball’s elite 3,000-hit club. Moments later, Cabrera went behind home plate to embrace his mother, wife, son and daughter on the field.

Cabrera soon returned to first base but didn’t stay there long. He scored on a three-run homer by 22-year-old rookie Spencer Torkelson, who has taken over as the Tigers’ regular first baseman with Cabrera in the role of designated hitter.

When the inning ended, the scoreboard flashed “Congratulations Miggy” and Cabrera emerged from the dugout to wave to fans who had been rewarded with the highlight they came to see.

Cabrera added a two-run single in the sixth inning before being replaced by pinch runner Eric Haase. The Tigers went on to win 13-0.

After reaching 2,999 hits Wednesday, Cabrera was 0-for-3 on Thursday against the New York Yankees. He was intentionally walked in the eighth inning, his fourth and final plate appearance of the game. Cabrera’s pursuit of history was delayed Friday, as the Tigers’ scheduled series opener against the Rockies was rained out, made up as part of a Saturday doubleheader.

Cabrera, who won the Triple Crown and the first of back-to-back MVP awards in 2012, became the 28th member of the 500-home run club in August. Only six other players have 3,000 hits and 500 homers: Hank Aaron, Willie Mays, Palmeiro, Pujols, Rodriguez and Eddie Murray.

Cabrera’s Triple Crown win in 2012, having led the American League in batting average, home runs and RBIs, was the first in 45 years. The 11-time All-Star has won four batting titles in his career.

Cabrera was 20 years old when he made his major league debut with the Marlins in 2003. He helped them win the World Series that year.

The Tigers acquired Cabrera in a 2007 trade, with Dontrelle Willis also going to Detroit in a deal for Andrew Miller and Cameron Maybin. Cabrera had 842 hits at the time.

He is the third player to get his 3,000th hit while with Detroit, joining Ty Cobb and Al Kaline.

The Associated Press contributed to this report.